Most people experience fears and worries throughout one’s childhood. Children commonly develop first fears as infants after being startled by a loud noise, while a fear of strangers commonly appears around six to eight months. Around two years of age,children frequently develop fears of imaginary creatures such as ghosts and monsters. As children age and enter the

school world, a new set of fears related to achievement and the school environment arises.

Similarly, children’s worries are quite common. While young children worry about being separated from parents, this worry is replaced by worries about test performance as children get older. These patterns of fear and worry are normal and cause mild anxiety. However, some children experience fear and worry that becomes unreasonable and causes impairment in daily functioning.

Even though anxiety disorders are the most common mental disorder in children and adolescents, they are rarely discussed. Anxiety interferes with making friends, school achievement, and self-esteem, thus impeding children’s normal development. Anxious children often grow up to be anxious adults, which is why early diagnosis and treatment is extremely important.

Even though Obsessive-Compulsive Disorder is no longer classified as an anxiety disorder by the Diagnostic and Statistical Manual of Mental Disorders (DSM-V),it is also frequently diagnosed during childhood. It is estimated that at any given time about one in every one hundred young people suffer from OCD. In fact, about thirty to fifty percent of adults with OCD have experienced first symptoms during childhood. Contradictory to adolescents and adults, children often do not understand that these thoughts and behaviors are unrealistic. Children often stay silent about their thoughts and suffer in silence, which 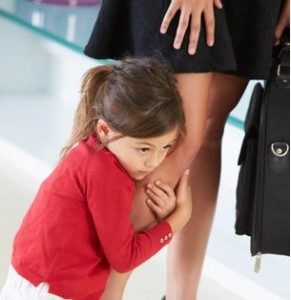 Compulsions in children are often performed in order to prevent something bad from happening. For example, a child might be worried about the safety of his or her family and believes that rituals must be completed in order to protect loved ones. Performing these rituals cause short-term relief from distress until intrusive thoughts re-occur and rituals must be performed again.

Childhood OCD is also highly comorbid with other diagnoses, which means that it often occurs together with one or more other mental disorders. A child with OCD often presents symptoms of an anxiety disorder, such as Separation Anxiety Disorder or Social Anxiety Disorder. OCD and anxiety disorders are highly comorbid with many internalizing disorders, such as depression, as well as externalizing disorders, such as attention-deficit hyperactivity disorder (ADHD). Comorbid conditions must be taken into account when planning treatment for OCD.

Cognitive-Behavioral Therapy (CBT) with Exposure and Response Prevention (ERP) is a highly effective treatment for OCD. Families should always be included in the process of designing and conducting exposures in order to facilitate treatment gains in the home environment. The treatment process is adapted to the developmental level of each child and exposures are explained in a language that both the child and the family can understand. To learn more about childhood OCD click here.